Professor Rachel Pinker is leading research efforts on this topic. Earth's climate depends on its radiative balance, controlled by solar input, surface properties, and distribution of radiatively active gases, clouds, and aerosols in the atmosphere. Radiative fluxes are the forcing functions of the climate system and are responsible for the maintenance of atmospheric motions. The exchange of energy from radiation fluxes to other forms of energy, such as sensible and latent heat fluxes, occurs at the surface of the earth. Therefore, it is of interest, to have information on surface radiative fluxes and their variability. This can enable scientists to improve parameterization of surface-atmosphere interactions, to validate climate models, and to better understand the hydrological cycle. The use of climate models for simulating plausible climate change scenarios, requires improved capabilities in respect to hydrologic modeling and in assessing the effects of increased greenhouse gases. Of special interest is the solar radiation in the visible part of the spectrum, namely, in the interval of 400-700 nm, known as the Photosynthetically Active Radiation (PAR). Information on the spatial and temporal distribution of photosynthetically active radiation (PAR), by control of the evapotranspiration process, is required for modeling the hydrological cycle and for estimating global oceanic and terrestrial net primary productivity (NPP).

Earth orbiting satellites are well suited to provide a global view of our climate. Professor Pinker and her associates in the Department of Meteorology and graduate students, participate in several national and international projects, aimed at improving the understanding of the climate system. Examples of projects include the Global Energy and Water Experiment (GEWEX), the Earth Observing System (EOS) Program, the GEWEX Continental-scale International Project (GCIP), the Large Scale Biosphere-Atmosphere Experiment in Amazonia (LBA) Project, the NOAA/NASA PATHFINDER Project, and the Advanced Earth Observing Satellite (ADEOS)-II mission sponsored by the National Space Development Agency of Japan (NASDA). These activities are linked to efforts at other institutions. 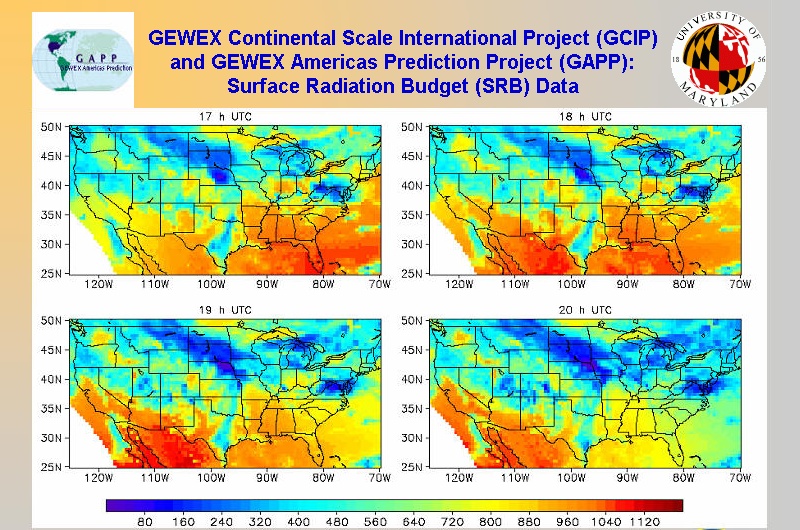 A close collaborative activity among the National Oceanic and Atmospheric Administration (NOAA)/National Environmental Satellite Data and Information Service (NESDIS), the NOAA National Center for Environmental Prediction (NCEP), and the Department of Meteorology, University of Maryland is supporting the Global Energy and Water Cycle Experiment (GEWEX) Continental Scale International Project (GCIP). Information on surface radiative fluxes is produced in real time by NOAA/NESDIS, using information from the NCEP ETA model. The derived information is used in a wide range of applications, such as evaluation of numerical models, estimation of energy budgets, and snow melt modeling. A novel application is the use of the radiative fluxes as forcing functions in numerical weather prediction (NWP) models, such as the Land Data Assimilation System (LDAS) project. It is hoped that this approach will reduce the errors in the storage of soil moisture and energy which are often present in NWP models and which degrade the accuracy of forecasts.

The Large Scale Biosphere-Atmosphere Experiment in Amazonia (LBA) is an international research project led by Brazil. The world's tropical forests are under major stress of conversion to various forms of land use. Research is in progress towards the improvement of understanding the hydrologic cycle of this region. It is anticipated that spaceborne remote sensing capabilities will help to define the basin scale forcing functions, to determine how the basin functions as a regional entity

In the EOS Validation framework, an activity in a desert encroachment zone in sub-Sahel Africa was undertaken, in collaboration with African scientists from the University of Ilorin, Nigeria. This is a climatically important region due to its location in a desert transition zone and because of the influence of the dusty Harmattan wind which is persistent for prolonged periods of time, and characterized by steady dusty conditions with high aerosol loading. Observations are made of surface radiative fluxes, as well as aerosol optical depth. The radiation observations are linked to the World Climate Research (WCRP) Baseline Surface Radiation Network (BSRN) activity, and aerosol data from this station are part of the (AERONET) network.